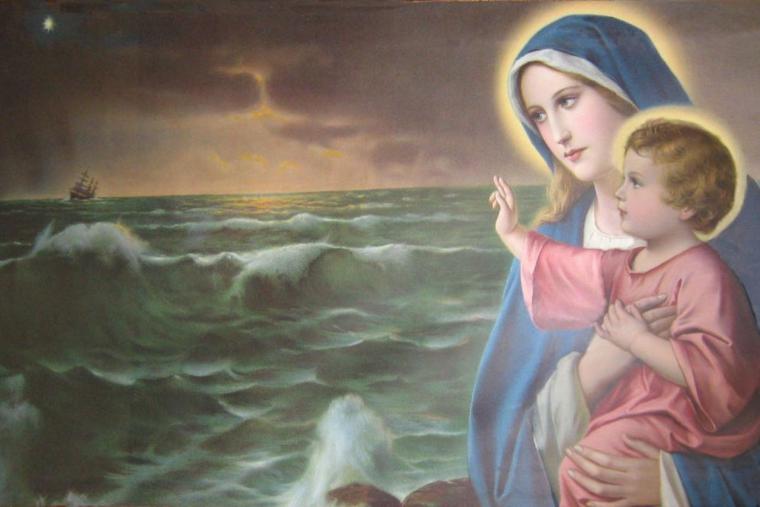 When people go to sea, the Church accompanies them| National Catholic Register

“He got into a boat and his disciples followed him. Suddenly a violent storm arose on the sea, so that the boat was submerged by the waves; but he was sleeping. They came to wake him up saying, “Lord, save us! We are perishing!” He said to them, “Why are you terrified, you people of little faith? a great calm. The men were amazed and said, “What sort of a man is he, whom even the winds and the sea obey?”

Jesus calming the storm, as detailed in Matthew 8:23-27, is just a maritime detail in the Gospels.

And the Church honors the Blessed Mother as Our Lady, Star of the Sea.

Additionally, each year in the United States, May 22 is the National Day of Prayer and Remembrance for Sailors and Seafarers. Also known as Maritime Day, it is “an occasion to recognize the hardworking men and women of the United States Merchant Navy, sailors, fishermen, port personnel, and all who work or travel on the high seas for the vital services they provide in support of human well-being economic and national security of our nation,” according to the website of the United States Conference of Catholic Bishops.

In times of peace, the merchant navy is essentially a conglomeration of merchant ships engaged in the transport of goods and services. However, in times of war, they can serve as an important auxiliary to the United States Navy.

Miracle on the water

In fact, there is a remarkable story from the Korean War of a Merchant Navy ship that is responsible for the largest humanitarian rescue operation by one ship – ever. The ship was called the SS Meredith Victory, and her captain was Leonard LaRue. Just before Christmas 1950, Captain LaRue and the Meredith Victory were delivering 300 tons of supplies to American forces when they saw a massive group of 100,000 troops and 100,000 Korean civilians attempting to evacuate. LaRue and his crew swung into action, unloading whatever supplies they could and filling the 455-foot freighter with refugees.

In the end, they were able to board about 14,000 people on this ship. Navigation was not easy after that, as there was not enough food, water, sleeping space or bathroom facilities on the ship to accommodate such a massive influx of people. But Captain LaRue knew what had to be done and he did his best to care for those in need. They finally arrived in a port that would accept them on December 24 and were able to unload on Christmas Day 1950. In those few days five babies were born on the ship and not a single refugee died.

Captain LaRue’s efforts have come to be called the “Christmas Miracle” and his ship the “Ship of Miracles”. It is still considered one of the most formidable maritime salvage efforts ever, and certainly the largest performed by a single ship.

The Captain’s life took a dramatic turn away from marine life a few years later, in 1954. He entered St. Paul’s Abbey in New Jersey, took the religious name Brother Marinus, and served the community. and the Church as a Benedictine monk. He lived humbly and in obscurity. Few had any idea that he had been part of such a remarkable and dramatic rescue in his past. In 1960, his abbot ordered him to leave the abbey and travel to Washington, D.C., to accept the Merchant Navy Meritorious Service Medal, the highest honor for the Merchant Navy.

He died on October 14, 2001. Immediately after his death, six Benedictine monks from South Korea arrived at the abbey, which helped revitalize it and turn it into something of a center of activity for Korean Catholics from the region. His cause for canonization was opened in 2019, and in June 2021 the bishops of the United States voted to advance Brother Marinus’ cause for canonization.

Captain LaRue — or rather Brother Marinus — can be considered an unofficial sponsor of Maritime Day. Prior to entering the Benedictines, during his career in the Merchant Navy, he served as a fine example of lived Christianity and an example of the maritime personnel for whom we pray on the National Seafarers’ Day of Prayer and Remembrance. and people of the sea.

These people – the maritime workers and their families – need spiritual care, this is where the Apostleship of the Sea comes in.

One organization that serves these maritime personnel is the Apostleship of the Sea of ​​the United States of America. The purpose of this organization is “to help seafarers with their spiritual needs” wherever and whenever needed. While U.S. military personnel at sea are served by Archdiocesan Chaplains for Military Services, United States Apostleship of the Sea provides chaplains for cruise ships, so passengers, staff, and crew on board have their spiritual needs met. They also provide chaplains for ports across the country, serving seafarers, fishermen, dockworkers, workboat operators, their families and others. More than just sacramental ministers, these chaplains attend to the spiritual needs of their flock and provide them with support, even helping to ensure they have just contracts and opportunities for rest and recreation.

The Apostleship of the Sea dates back to 1920 in Glasgow, Scotland, where three men recognized the need for chaplains on the world’s waterways. Pope Pius XI blessed their business and encouraged them to reach out to the world. It was recently renamed, appropriately, Stella Maris.

Pope Saint John Paul II duly recognized the organization and its good work in its motu owner Stella Maris: “Stella Maris (Star of the Sea) has long been the favorite title by which people of the sea invoke her whose protection they have always trusted: the Blessed Virgin Mary. His son, Jesus Christ, accompanied his disciples to their vessels, helped them in their work and calmed the storms. Thus, the Church accompanies seafarers, caring for the particular spiritual needs of those who, for various reasons, live and work in the maritime world.

Father Michael Champagne of the Community of Jesus Crucified, who organizes the annual Eucharistic boat procession on the Louisiana bayou, is no stranger to waterways. “I grew up in southwest Louisiana in Bayou Teche and spent a lot of time fishing and enjoying the water. Later I served in the chaplain corps of the 6th United States Navy fleet,” he told the Register.

“I quickly learned that living and working on the water helps to understand the beauty and greatness of God, as well as the unpredictability of nature and the dangers at sea. In the Gospels, we often see Jesus at the edge of the sea, in a boat on the sea, or even walking on the roaring waves of the sea and calming them. As we celebrate Maritime Sunday, give thanks to God for all who serve and earn their living on the water. And let us always remember to pray for them and attend to their spiritual needs.