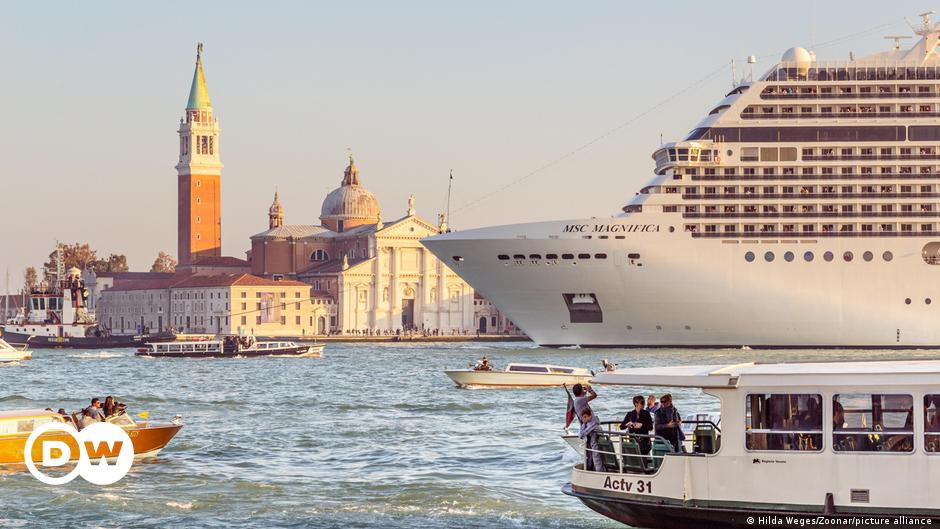 For years, the pros and cons of large cruise ships entering Venice have been the cause of endless local and international debate. But from August 1, liners will no longer be allowed to enter the lagoon city, the government of Rome announced on Tuesday after a cabinet meeting,

The decision is timely. On July 16, the UNESCO World Heritage Committee will meet in Fouzhou, China to discuss Venice’s status as a World Heritage site and whether the city in northern Italy should be inscribed on its list of “World Heritage Sites in Danger”.

Times like these are becoming increasingly rare in and around Venice

This so-called red list includes World Heritage sites whose status is considered threatened by UNESCO due to a variety of negative impacts largely related to overtourism.

A decisive criterion for the endangerment of Venice is the presence of liners. For many years, UNESCO has been watching developments in the lagoon city with a keen eye.

Not only do giant ships pollute the air with their exhaust fumes when they stop over in Venice; their passage also adds to the pressure of water pushing against the submerged foundations of historic buildings in the city. The liners also destroy the sensitive ecosystem of the lagoon when they arrive in town each summer.

The rising waters have already threatened the integrity of many historic buildings in Venice. The problem is exacerbated by the combination of high tides and heavy storms that flooded much of the city in 2019.

But there is another type of flood that worries the guardians of the World Heritage site: the masses of tourists who descend every summer on places like Saint Mark’s Basilica. In 2019, some 16 million visitors are said to have come to see the alleys and canals of Venice – where the local population of the central old town has fallen to less than 60,000. It’s unclear if that might change after COVID-19, but Venice has always been a hotbed of global tourism.

This over-tourism of the city is another factor that could threaten Venice’s World Heritage status and move it closer to the Red List. In this sense, banning cruise liners from entering Venice may not be enough on its own to guarantee the city’s continued UNESCO status.

The wrecked city suffers from politics as usual

The World Heritage title was awarded to Venice in 1987 on the grounds that the entire city was “an extraordinary architectural masterpiece in which even the smallest buildings contain works by the best artists in the world, such as Titian, Tintoretto and others “.

But the cruise ship industry has left its mark on the city for many years. For the Venetians, the huge cruise ships caused only lasting damage to their city, with passengers spending little to no money in local stores.

The Italian central government in Rome is desperate to hang on to the World Heritage title for Venice, and sees the issue as a national emergency.

If Venice were to be put on the UNESCO Red List, it would be “a very serious matter for our country,” Italian Culture Minister Dario Franceschini wrote after UNESCO announced that the city’s status was under review.

However, the central government failed to come up with a viable solution to the problem and forced local politicians to take full responsibility.

Two years ago, the mayor of Venice Luigi Brugnaro even demanded that UNESCO put his city on the red list because he felt abandoned by Rome. His plea was sparked after an uncontrollable cruise ship crashed into a tourist boat on the busy Giudecca Canal.

“No punishment or warning”

It is not known whether Mayor Brugnaro’s wish will come true at the next meeting of the UNESCO World Heritage Committee in Fuzhou. The ban on cruise ships, however, is seen as a positive sign.

The World Heritage Organization stresses that any potential attempt to place Venice on the list of endangered sites would be “neither a punishment nor a warning”.

“Rather, it is a mechanism to preserve these extraordinary places for future generations,” said Peter Martin of the German Commission for UNESCO. The Red List designation, he adds, simply shows that urgent action is needed to achieve the goal or preservation.

â€œTo ensure this is successful, the World Heritage Committee publishes concrete measures to be taken to avoid threats to World Heritage while making recommendations for these sites,â€ explained Martin.

This approach can still lead to lasting success, Martin said. This was the case with the Church of the Nativity of Jesus Christ in Bethlehem, which was threatened by structural degradation, growth in tourism and a tunnel project. When it was subsequently placed on the Red List of the World Heritage site, the underground construction project was canceled and the church was extensively restored – with significant financial support from Sweden and Italy. This ultimately led to the church regaining its World Heritage status.

According to Martin, it has even become necessary to permanently withdraw the World Heritage status of two of the more than 1,000 World Heritage sites: the Elbe Valley Cultural Landscape of Dresden and the Arabian Oryx Wildlife Sanctuary. in Oman.

And unless World Heritage status is ultimately removed from a place, “endangered” sites are still allowed to advertise their UNESCO credentials.

But continuing to profit from World Heritage status could be counterproductive. In the case of Venice, critics believe it would fuel more unsustainable tourist arrivals in already fragile hot spots such as St. Mark’s Square.

Passenger tested positive for COVID-19 on my cruise, here’s how the cruise line is protecting us