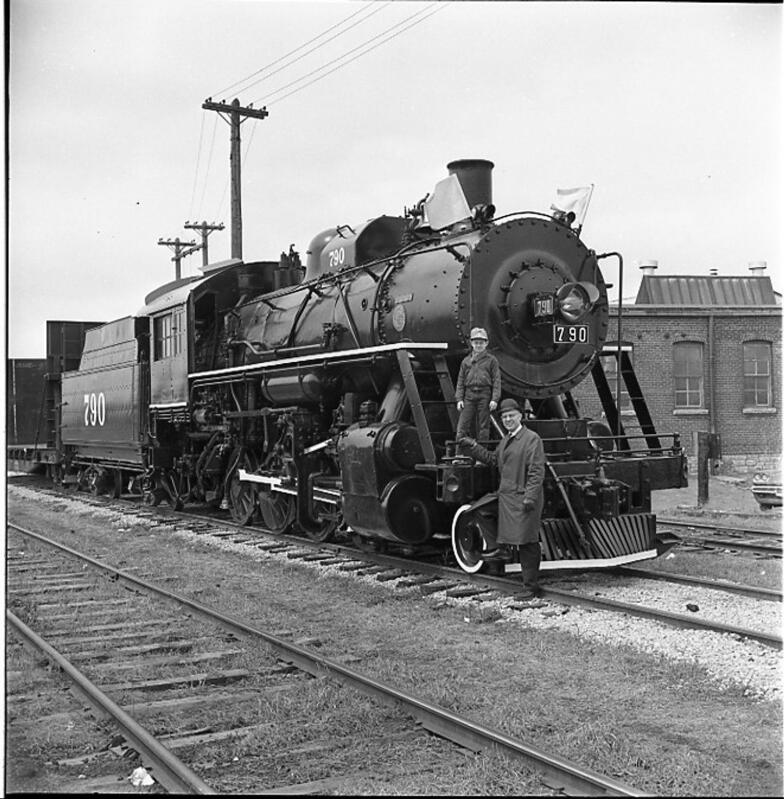 Time Machine: the old steam locomotive saved by a man from Cedar Rapids

Lou Keller and Merle Anderson, 9, both of Cedar Rapids, officiate as Keller’s Old 790 steam locomotive prepares for a trip in April 1965 to Clinton. Keller purchased the steam engine, built in 1903, from the Illinois Central Railroad in 1959. It is now located at the Steamtown National Historic Site in Scranton, Pa. (Gazette Archives)

The Illinois Central Steam Locomotive # 790 had spent 55 years in the freight service and was heading to the junkyard in 1959 when railfan Lou Keller bought it and brought it to Cedar Rapids. from Memphis, Tenn.

Keller, owner of Keller’s Office Supply at Second Avenue and Fifth Street SE, placed the locomotive on a siding near Oakland Road NE, where people came to inspect the engine under the direction of four boys Keller hired as guides.

They took tours around the 61-foot-long locomotive, explaining the operation of the 2-8-0 consolidation type engine. The engine was built in November 1903 by the American Locomotive Co. for the Chicago Union Transfer Railway Co.

The locomotive was sold to the Illinois Central Railroad in 1904 and renumbered No. 641. In 1918, it was rebuilt into an â€œoverheated heavy freight locomotiveâ€. It was renumbered again in 1943, becoming IC 790.

Diesel engines began to be widely used in the 1950s, replacing steam locomotives.

After Keller bought the steam locomotive, he moved it with his caboose to the Darling Co. marshalling yard, formerly the Rock Island Railroad roundhouse, not far from the west shore of Cedar Lake, where it has been dismantled and overhauled.

On September 17, the steam locomotive pulled out of Cedar Rapids onto the track beside the First Avenue municipal parking lot, the first to do so in 15 years. It towed four air-conditioned Milwaukee-Hiawatha cars, a baggage refueling car and an old-fashioned combination car, which carried both passengers and cargo.

Charles Jones Sr., the son of famous railroad engineer Casey Jones, participated in the excursions on September 17 and 18. Charles was 12 when his father died in the sinking of the “Cannonball” locomotive in 1900. “The Ballad of Casey Jones” immortalized the sinking and Jones’ life-saving actions.

The locomotive’s two excursions drew 622 passengers – 282 on Saturday and 340 on Sunday. Sunday’s race included a train robbery near Fairfax organized by about 15 â€œarmedâ€ riders from the West Side Saddle Club.

The Williamsburg and Sigourney firefighters used hoses to replenish the engine’s water supply, as the old water tanks that once powered steam engines no longer existed.

CD Fullerton of Cedar Rapids, a retired Rock Island engineer who assisted with the overhaul of the locomotive, got off the train at his first waterhole in Williamsburg. He let himself be left behind.

â€œIn 50 years of railroading, this was the first time he missed a train,â€ The Gazette reported. â€œHe tried in vain to hire a taxi to take him to the line to catch his train.

â€œTo the rescue came George Schindler, steward of Iowa County Home, who took Mr. Fullerton to Parnell, passing the train along the way. There remains the problem of stopping the train. Mr. Fullerton solved it by borrowing Mr. Schindler’s shirt to report 790.

While the 790 was rare, it was not the only operating steam locomotive in the country.

But it was the only one that â€œwas put back into working order by a handful of men from Cedar Rapids who, despite having varying types of jobs, shared a common love: the steam railway. The results of this dedicated work were shown quite spectacularly when the 790 took over Rutledge Hill at Ottumwa “without a help desk,” reported V. Allan Vaughn, president of the Iowa section of the National Railway. Historical Society in Oelwein.

The Old 790 continued to operate on short rails at Hawkeye Downs after 1960, and it remained on display there until 1965, along a 490-foot track during the All-Iowa Fair and other exhibits.

The engine was returned to service in April 1965 when floodwaters blanketed the Clinton railroad tracks.

Vast corn supplies were threatened at the Clinton Corn Processing Co. plant. Diesel locomotives could not pass through water deeper than a few inches. The old 790 could pass through water to its combustion chamber – about 5 feet.

A diesel engine towed Old 790 to Clinton, where it hauled 50 wagons of corn a day through the floodwaters.

Reports of the engine rescue mission surfaced in New York City, where the New York Central Railroad was looking for a steam engine to pull tour and ski trains into the Adirondack Mountains.

Keller, claiming the 790 had “too much engine” to rust on a siding, sold the locomotive. It was delivered to Chicago, where New York Central transported it to Lake Placid, NY

In 1966, Old 790 was shipped to Steamtown USA, New Hampshire. In 1984, it went to Steamtown National Historic Site in Scranton, Pennsylvania, where it still stands today.

Keller, the man who saved Old 790, left the office supply business and drove for CRST and then Westside Transport. He remained a member of the Iowa Chapter of the National Railway Historical Society until his death in 1985.

The old steam engine 790 leaves for a trip to Clinton in April 1965 to transport loads of corn through floodwaters to the Clinton Corn Processing Co. (Gazette archives)

Get 50% off the second guest cruise fare with Celebrity Cruises