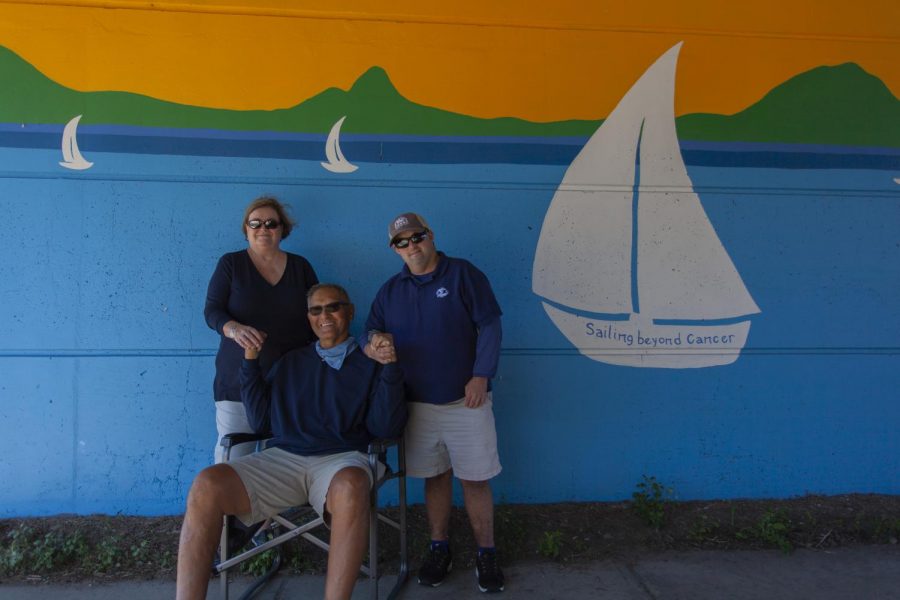 There is now a tranquil scene of sailboats floating on the water on the underpass at the corner of Farrell and Swift Street in South Burlington.

The 12-foot-by-50-foot mural, completed last month, was made by cancer survivor Steve Milizia to honor and preserve his experiences. He participated in Sail Beyond Cancer, a local organization that brings cancer patients and their loved ones to Lake Champlain.

Suzanne Johnson, founder and executive director, said that with chapters in Burlington and North Shore, Mass., The nonprofit is recruiting candidates for private three-hour sailing trips.

“When you go through something like this, it’s the most refreshing and invigorating thing,” Milizia said.

Milizia wanted to share the powerful experiences the organization can offer other cancer survivors.

“My family and I just wanted to do a nice, quiet thing to thank you,” Milizia said.

He thought a good way to do that would be to get involved in the recent campaign to put art on some of the city’s more mundane structures, like electrical boxes.

Local infrastructure has seen a peak in art in recent years. The project is led by Katie O’Brien-Barritt, a retired art teacher from South Burlington. She brings in people from the community with ideas that interest them, and she usually deals with getting permits and supplies, she said.

Since O’Brien-Barritt did not have electrical boxes available at the time, she offered Milizia the 12-foot-by-50-foot wall of an underground passage, she said.

Milizia did her best to get a permit and a crew to paint the mural. But between the Vermont Department of Transportation’s stalling of the clearance process and Milizia’s declining health, he handed the project over to O’Brien-Barritt to move the clearance process forward, he said. declared.

With significant community support, O’Brien-Barritt petitioned the department. Thanks to his persistence, the project was finally approved and O’Brien-Barritt set to work to find an artist to do the design and volunteers to bring it to life.

“Five days later it was done,” said O’Brien-Barritt. “I posted something on the Front Porch Forum looking for volunteers, and in just 24 hours, 10 people volunteered.”

Painter Phyllis Bartling conceived the design and in less than a week the mural was completed in mid-August. She had so many volunteers that she had to fire people because the mural was already finished, O’Brien-Barritt said.

O’Brien-Barritt said this project represents the value of a united community.

“That’s the beauty of South Burlington,” said O’Brien-Barritt. “Whenever something comes up, I just go to the Front Porch Forum, put a note and people are always ready to help or step up and volunteer their time. “

In addition to being a founder, Johnson is one of the 18 captains of Sail Beyond Cancer. As a single mother undergoing breast cancer treatment, she found refuge on the water, she said.

“Being on a boat, being empowered by nature, by the wind; it was incredibly powerful for me, my family and my friends, ”Johnson said.

Those experiences prompted her to launch Sail Beyond Cancer in 2014. The nonprofit allows attendees to sail for free, Johnson said.

All trips are made on boats owned by private owners or donated to the organization.

With 18 boats at their disposal, each excursion is led by a captain and two team members, most of them volunteers. They allow applicants and their families to be as involved in the navigation process as they want.

Johnson said it was a unique experience for cancer nonprofits to interact directly with the patient and their loved ones.

Milizia walked through the underpass while it was being painted and was delighted to see the result.

“They paint the most beautiful, calmest, most wonderful scene that expresses what I believe to be Sail Beyond Cancer,” Milizia said.

The story of the mural is one of old friends, new friends and a community coming together to represent the nonprofit they believe should be recognized, Milizia said.