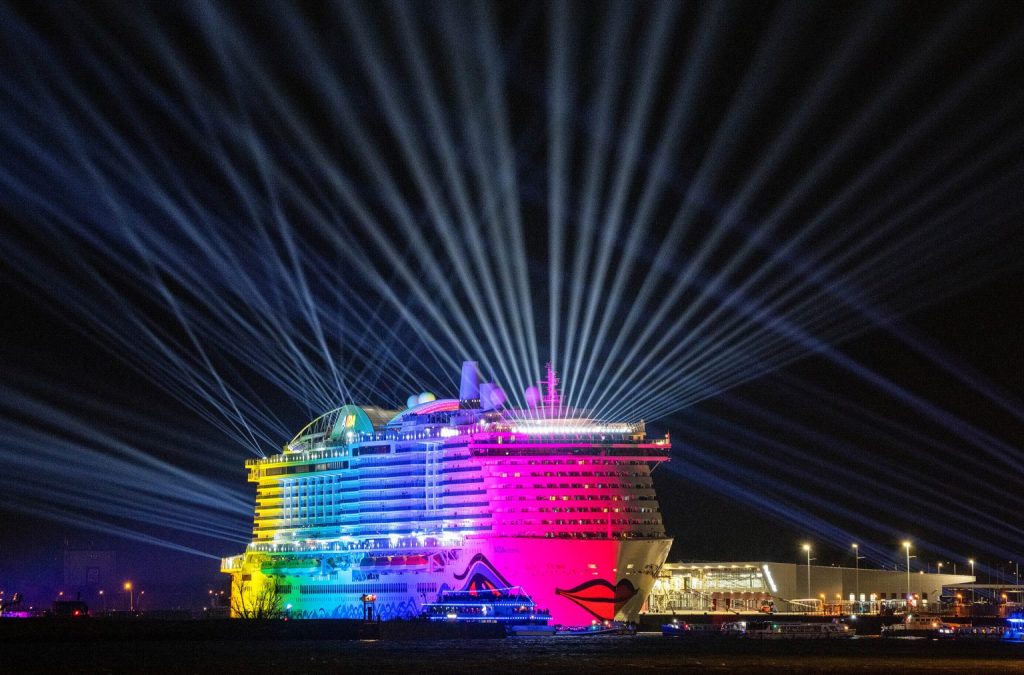 The event – themed ‘the world is getting more colorful’ – took place in Hamburg, Germany on April 9 before the ship set sail on its maiden voyage to Mallorca.

Flo Erdmann was the first lighting designer in the world to use Cameo’s new point-scan hybrid moving head for a large-scale event. He placed the OTOS H5 lights, arranged in fan-shaped clusters in groups of six, on various decks and along the ship’s railings. During a performance by DJ Alle Farben, 16 additional lights were deployed on the Ocean Deck at the rear of the ship.

“We were looking for a projector that would allow us to make a high number of units – within the budget – that could cope with the dimensions of a baptism of ship.”

He added that he was impressed with the combination of IP65 certification and lighting performance of the OTOS H5. “The OTOS H5 is really light, which helped the crew a lot in this context,” Erdmann said. “It’s also fully outdoor capable and extremely bright. For me, there’s nothing like it in this performance and budget class.

Erdmann worked together with Sven Sören Beyer from the Berlin artist collective Phase 7. The project was coordinated by JP SPACES, a Hamburg-based planning office for event architecture. AMBION GmbH acted as the central technical service provider for the event, which was broadcast live.

The OTOS H5s were supplied by NicLen GmbH, which was one of the first dry-hire providers in the world to invest in the Cameo series. “With the OTOS H5, we have deliberately invested in a hybrid moving head that can be used flexibly in the outdoor sector and thus meets the growing demands of the market”, says Managing Director Jörg Stöppler.

Ruthless fraudster ordered to pay back just £1 after scamming friends, colleagues and ex-partner out of £113,000