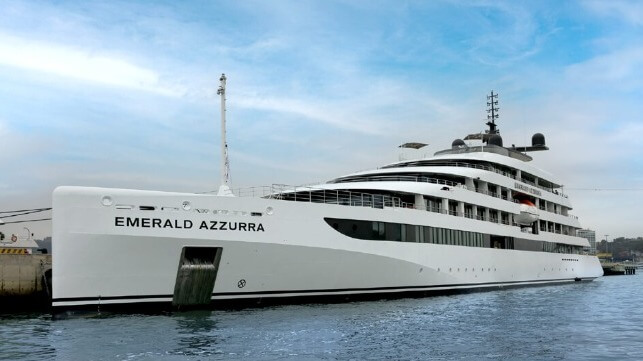 
The new yacht-style luxury cruise ship Emerald Azzurra has completed construction and has been delivered to her owners, Emerald Cruises, part of the Scenic Group. The unique 100-passenger vessel is designed to combine the conveniences of cruising with the luxuries of a private yacht, prompting the company to call the vessel a superyacht.

Built at the Ha Long shipyard in Vietnam, the ship left for its delivery trip on February 8 to Aqaba, Jordan, where it is due to embark passengers for its first navigation on March 11. Emerald Azzurra is the first of two ocean-going cruise ships built for Emerald, which operates eight river cruise ships in Europe and one on the Mekong, as well as a chartered river vessel operating Russian waterways.

“Today marks a major moment for our team at Emerald Cruises as the first of our fleet of ocean-going superyachts takes a giant step towards completion,” said Glen Moroney, Founder and Chairman of Scenic Group. “This yacht represents the next generation of yacht cruising, taking guests to new destinations with luxury onboard amenities unlike any other small ship experience.”

A first for yacht cruising, Emerald Azzurra has a wide range of equipment. Passengers are accommodated in 50 suites, more than 88% of which have balconies and offer more space per guest than similar ships of her size. The yacht also has an infrared sauna, a large infinity pool, a spa, a gym and a marina platform, with SEABOBs, paddleboards and snorkeling equipment. A fleet of e-bikes is also available on board for port travel.

The vessel, which is approximately 361 feet long, also offers passengers an air deck bar and viewing area, a poolside cafe and a restaurant for a total of three dining locations. It will have a crew of 64 people. It also carries three tenders stored in a garage and a Zodiac for shore landings.

She is unique as the first luxury cruise ship to be built in Vietnam. Ha Long Shipbuilding Company was contracted to build the hull and install all machinery for Emerald Azzurra, with all interior fittings handled directly by the Emerald Cruises project team. The ship’s first steel was cut in December 2019 and it was launched in December 2020.

After her maiden voyage, the Emerald Azzurra will transit through the Suez Canal to embark on a series of sailings in the Mediterranean and along the Adriatic coast over the summer before returning to the Red Sea next winter. Her sister ship, Sakara Emeraldis expected to be delivered in February 2023 and will sail to the Seychelles, the Black Sea and the Middle East.