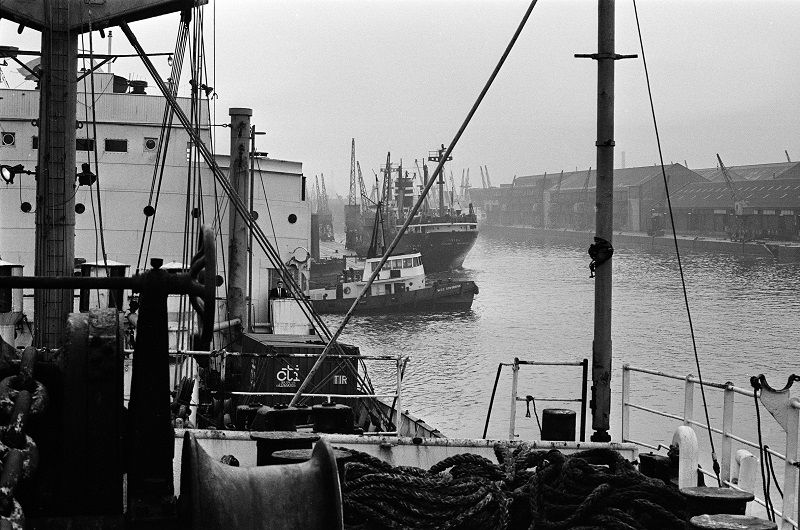 Our main image for this week captures the bustle of the Manchester docks on a June morning in 1967. Ships unload as tugs ply their trade.

In the center is the Manchester Ship Canal Company tug MSC Sovereign, built at PK Harris and Son’s Appledore shipyard in 1957.

The 147 ton Sovereign was a familiar sight on the Manchester Ship Canal until 1988 when she moved to Birkenhead. It was dismantled in 2006.

They were part of the Port of Manchester from 1894 until their closure in 1982.

The docks were divided into two sections – Salford Docks to the west of the Trafford Road Swing Bridge and Pomona Docks to the east.

Manchester was Britain’s third busiest port in 1948 after Hull suffered damage in the Blitz.

But the decline set in in the 1970s, as containerization required larger ships that were simply too big for the shipping channel.

After closing in 1982, the docks became derelict. Salford City Council purchased the area in 1984 and adopted the Salford Quays Development Plan in 1985.

From 1986 to 1990, the quays were transformed with new bridges, roads and a promenade. Housing, offices, a cinema and a hotel were also built.

Our modern image from 2015 shows part of the old docks looking towards Media City in Salford.

Get all the latest news, updates, things to do and more from your local InYourArea feed.

If you would like your images of Manchester and the Greater Manchester area to be featured on InYourArea.co.uk head towards our Memory Lane function and share them there, or email us at nwcommunities@reachplc.com

* iNostalgia’s latest book – Manchester Then and Now – is on sale now. It is an essential compilation of images from yesterday and today which appear every Sunday in the MEN.

Resumption of cruise service between Visakhapatnam and Port Blair