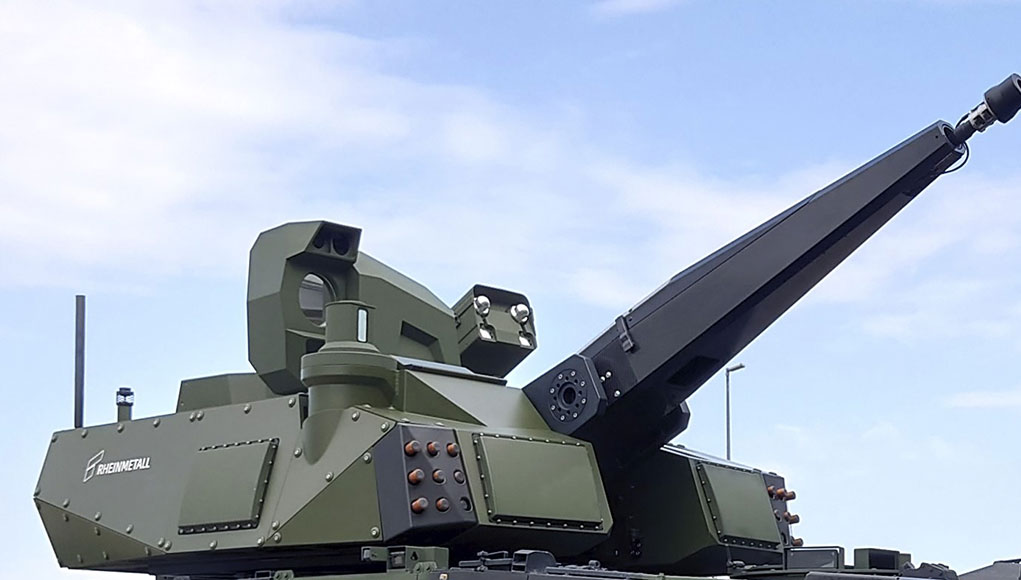 Rheinmetall Defense introduced another variant of its Skyranger air defense weapon system, the Skyranger 30 HEL – a mobile, hybrid solution that mounts the company’s 30mm AHEAD with an onboard laser. As a hybrid solution, the Skyranger 30 HEL is designed to counter the full range of current and future aerial threats. The interplay of a 30mm autocannon, guided missiles and a high energy laser (HEL) results in a unique effector mix in this suit. The Skyranger HEL was first shown to the public at an anti-drone event last year hosted by Swiss procurement agency armasuisse in Bure, Switzerland.

Combined with the Skymaster fire control system and various effectors, the Skyranger 30 HEL achieves maximum tactical impact. It can monitor the airspace autonomously, while simultaneously selecting the optimal effector in response to the detected threat. Missiles provide the outer layer of defense primarily against aircraft, helicopters and unmanned aerial systems. The gun, firing AHEAD or ABM (airburst) ammunition, is designed to defeat hard targets, such as rockets and projectiles, and add a second line of defense to missiles. The laser works at close range, to defeat soft targets, such as drones and lurking missiles, as well as against helicopters, planes and guided weapons, targeting their optical systems.

In actual tests, current technology sample systems for laser weapon systems have successfully achieved laser powers of 20 kW. Laser powers of up to 20-50 kW are planned for the first phase of construction. The possibility of increasing this figure to 100 kW is already an integral part of this technology, combining several fiber optic lasers into a single powerful beam. The laser weapon station used on the Skyranger 30 HEL has its own sensors to identify and track targets. System subassemblies are coordinated to interoperate seamlessly to produce the beam quality required for high-output laser weapons, allowing the beam director to point and track the target with high precision.

Mounted on an armored vehicle chassis, the Skyranger 30 HEL can protect moving mobile units or critical fixed infrastructure and installations from aerial threats. Missile and laser integration is part of Rheinmetall’s air defense roadmap. As an experienced systems company for combat vehicles and air defense systems, Rheinmetall can support mechanical and system integration in wheeled or tracked mobile platforms such as the Boxer wheeled multi-purpose armored vehicle. or the Lynx KF41 tracked armored vehicle.

With a rate of fire of 1200 rounds per minute, the 30mmx173 KCE revolver pistol is the most powerful weapon in the world in this caliber. Programmable timed rounds increase the likelihood of hitting even the smallest air targets. The Skyranger 30 HEL’s guided missiles increase the system’s operational flexibility and maximum range.

Crypto, NFT, Web3: People Hate the Future of the Internet