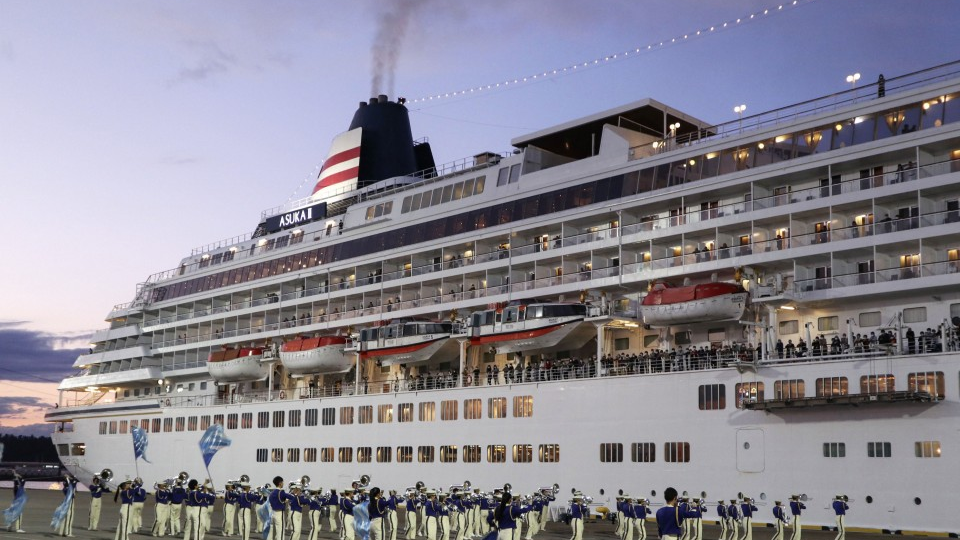 Japan cruise ships back on track with COVID security measures

The cruise industry in Japan is getting back on track as ships gradually resume navigation with COVID-19 safety measures in place after many trips canceled due to the pandemic.

Major cruise ships Asuka II and Nippon Maru had made a total of 21 trips on Monday, having restarted operations shortly before or after the government ended in September the coronavirus state of emergency that covered Tokyo and several other prefectures.

High school students perform in a marching band to send the cruise ship Asuka II to a port in Hitachinaka, Ibaraki Prefecture on November 3, 2021. (Kyodo)

In early November, the 50,444-ton Asuka II with around 300 people on board entered a port in Hitachinaka, Ibaraki Prefecture, becoming the first cruise ship to call at the eastern port of the Japan for about two years.

â€œI haven’t been able to travel anywhere lately, but I joined this cruise because I heard it was going to be sailing nearby,â€ said a man in his sixties from Suzaka, in Nagano Prefecture, who made the trip with his wife.

While the man admitted he was worried about the coronavirus, he said passengers must follow strict protocols to be allowed on board, including testing negative for the coronavirus.

In order to prevent the spread of infections, the Ibaraki prefecture government also banned people from welcoming the ship from the dock.

“It is quite difficult to strike a balance between coronavirus countermeasures and economic activities. We have finally come this far,” said Hiroetsu Aoyama, a senior prefecture official.

Since resuming operations in October, the Asuka II has made several trips, including a trip from Yokohama, near Tokyo, to Nagasaki in the southwest, with an Asuka official saying demand for such trips has increase.

Antivirus protocols implemented by operators also have reduced capacity. The operator of the Asuka II, which can accommodate around 870 passengers, allows only half of the ship’s capacity, while the Nippon Maru also allows around 65% of its capacity of around 530 people.

Operators will perform COVID-19 tests for passengers before and on the day they board the ships.

In May of this year, the Asuka II embarked on an interior cruise to return to the port of Yokohama after a passenger tested positive for the novel coronavirus.

In February of last year, at the start of the COVID-19 epidemic, the Diamond Princess cruise ship was quarantined in the port of Yokohama after infections were discovered among some 3,700 passengers and members of the crew from 56 countries and regions on board.