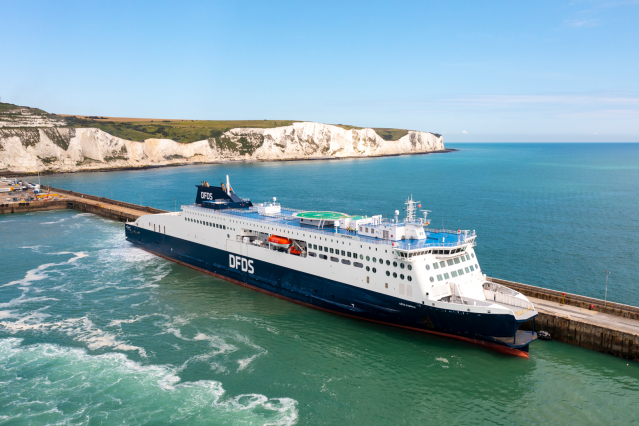 The cross-Channel operator Brittany Ferries is hoping for a â€œrebound yearâ€ in 2022 with a four-fold increase in the number of passengers in 2021 and an injection of 25 million euros from a new partner to strengthen its freight service.

Other companies operating the Dover-Calais route are supported by a huge port extension – and a new associated 1,000 mÂ² duty-free shop – in Calais which will come into service in October and will now allow it to handle the next generation of larger ferries.

Brittany Ferries, which until now relied on passengers for 80% of its revenue, has been hit hard by Covid travel restrictions for the past 18 months and has had to suspend several crossings between Ireland, France, England and Spain.

Today, the company has attracted new investment from French shipping and container giant CMA CGM to improve its freight capacity.

“This is great news for us,” said Nigel Wonnacott, communications manager.

“We are now in a much stronger position to recover in 2022.”

Another positive sign is its order for two new vessels running on liquefied natural gas (LNG), which are expected to join its fleet in 2022 and 2023. They will operate between the UK and Spain.

Brittany Ferries does not operate the Calais-Dover route, but ferries that do can now take advantage of the huge new extension of what was already the largest passenger port in continental Europe.

Six years of work, costing 863 million euros, enabled the construction of a new three-kilometer dike and three new berths. It doubles the previous capacity of the port which, on average, handles 10 million passengers per year, in addition to its large freight operations.

A major attraction will be the 1,000 mÂ² duty-free shop, where visitors to post-Brexit England – or those going on a day trip – can stock up on cheaper alcohol or cigarettes.

Investment in the port already seems to be paying off. In June Irish Ferries became the third company to operate Dover-Calais ferries, joining P&O and DFDS.

Xavier Bertrand, President of the Hautsde-France region, said at the inauguration of the enlarged port in September: â€œDo you think Irish Ferries would be here without this new port and these new possibilities? Never in a million years. ”

In addition, DFDS has assigned a new ferry, the Opal Coast, to the route. The ship made its maiden voyage to Dover in August and is the longest vessel currently on the crossing, making five round trips per day with a capacity of 140 trucks, 250 cars and a maximum of 1,000 passengers.

Peder Gellert, head of DFDS’s ferry division, said the company is seeing a gradual return to normal and hopes the new vessel will stimulate new bookings.

â€œHis arrival is a signal that people can start thinking about moving again,â€ he said.

United Kingdom-France: no date set for the return of Eurotunnel’s frequent flyer program