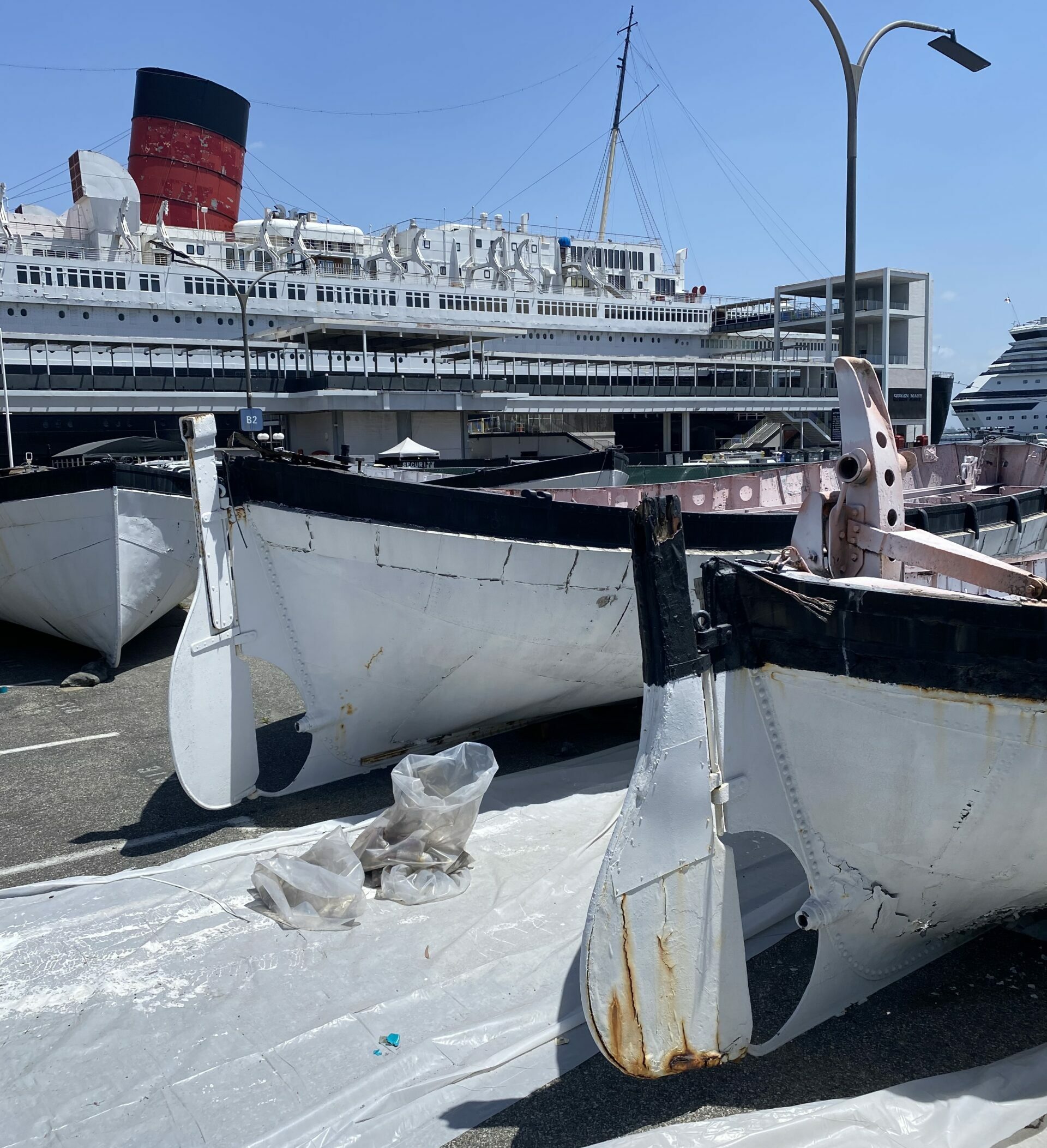 On Friday morning, workers in protective gear were scraping off the lead paint and an excavator with a large metal claw tore up the vessels for easier removal on a flatbed truck. It marked the last voyage for most lifeboats after no qualified bidders showed up to buy them in Long Beach.

As part of several critical safety projects for the Queen Mary, Long Beach this week began the process of removing 14 of the lifeboats hanging from the deteriorating liner.

The boats, which are about 36 feet long and weigh around 12,000 pounds, were removed from the ship in February via a large crane after the city determined they were a safety hazard and at risk of falling .

Of the ship’s total 22 lifeboats, three have been identified for retention, including two that were left on the ship. Five have been set aside for future review, city officials said.

“Removing nearly 100 tons of weight alleviated significant stresses from the vessel’s side hull and allowed for other critical repairs to be made to the internal support system,” the city said in a statement Friday. “Additional work for internal structural repairs began this month and is expected to be completed later this year.”

The city was dismantling the boats in accordance with safety and environmental regulations, while working to identify certain parts that could be saved and creatively reused, including props, rudders and other artifacts of interest, said officials.

Long Beach has auctioned off the boats for museums, preservation groups and developers who may want to take any or all of the boats for catering. The city said it also engaged with local, regional and national historic and preservation organizations, but ultimately only two proposals were submitted, and neither met the city’s requirements to show how they would safely transport and repair ships.

In a costly caveat, any winner would have had to provide their own transport to transport the ships out of the Queen Mary car park, and they would also have had to sign a liability waiver since the boats contain lead paint.

Completed in Clydebank, Scotland in 1936, Queen Mary originally had two smaller lifeboats and 22 lifeboats, seating up to 145 passengers.

An assessment by architectural consultancy Wiss, Janney, Elstner Associates found that 15 of the boats are original Queen Mary, while the rest may be from other liners.

The Queen Mary remains closed to the public while the city completes $5 million in critical safety repairs. The city plans to reopen the ship later this year.

A report released last year by marine engineering firm Elliott Bay Design Group said the Queen Mary would need $23 million in urgent safety repairs to remain “viable” over the next two years. A 2016 marine survey found the ship would need $289 million in repairs.

The next round of critical repairs will include improvements to the ship’s bilge pump systems and bulkheads, which support structural stability and help shed water in the event of flooding.

The city will also continue carry out minor repairs, including painting, lighting and other maintenance work.

Editor’s note: This story has been updated to reflect new details from the city about Queen Mary’s lifeboats and repair projects.