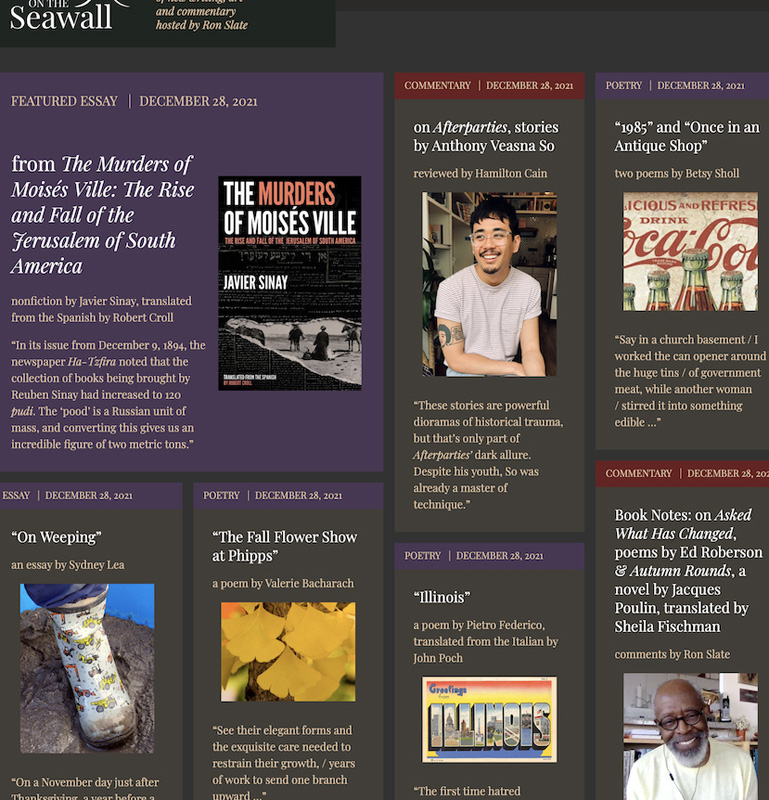 The Pathways Arts organization has held weekly readings of new works since its inception. For more than a decade, he has encouraged local poets and writers to bring work to share with the community – first in person, then on Zoom during the worst of the pandemic. Now, in order to shake things up a bit, the organizers of Pathways have brought in an accomplished poet and literary critic to partner writers from across the country.

Ron Slate, resident of Aquinnah, has published two books of poetry with Houghton Mifflin. He also publishes an online journal called On the Seawall, which features new work in the fields of poetry, essays, fiction, art and commentary. Contributors and guest editors include nationally recognized writers, reviewers, and translators. Slate describes the mission of the online publication, writing: “We see On the Seawall as a ‘gallery’ – a place in the neighborhood, a place where we exhibit our work for our community, where everyone is welcome to create and to witness the work. “

Now, Slate brings the same spirit of inclusion and community engagement to the readings of Pathways, which he leads. The current format combines live and in-person readings with visitors participating through Zoom. A large screen is installed in the Pathways area of â€‹â€‹the Chilmark Tavern to allow participants to listen and interact with invited participants.

So far, featured readers have included poets Elaine Sexton, Elizabeth Jacobson, and Lynne Thompson. Sexton is a New York-based poet and author of three books. His poems, art reviews, book reviews, and visual art have been published in journals and anthologies, textbooks, and websites including American Poetry Review, Art in America, Poetry, O! Oprah magazine and the Poetry Daily. Sexton teaches Sarah Lawrence and has been a visiting professor at NYU and City College in New York.

Elizabeth Jacobson was the Santa Fe Poet Laureate from 2019 to 2021. She has published two books of poetry, and she founded and runs the WingSpan Poetry Project, which runs ongoing poetry classes with shelters.

Lynne Thompson is the current City of Los Angeles Poet Laureate. Her three collections of poetry have won numerous awards and she serves on the boards of the Los Angeles Review of Books, Cave Canem, and the board of directors of Scripps College (current president).

After guests read on Zoom, community members – those who attend in person or through Zoom – are invited to share their work.

“In my mind, there should be no border between the person who has a full-time job and writes about his father, and someone who has published an entire book of elegies and written for The New York Times,” says Slate, who is impressed with the number of talented writers the island boasts. He is currently working with two young writers and encourages young poets and writers to participate in Pathways readings.

Slate started attending Pathways Zoom readings in 2020. â€œWhen the pandemic started, I was on my own, so I started attending Zoom meetings on Tuesday,â€ he says. Finally, Pathways Co-Director Keren Tonnesen asked if he would be interested in leading the readings. His involvement allowed the organization to expand beyond the island thanks to Slate’s friendships and connections with writers from across the country.

Slate himself has an impressive resume. He received his MA in Creative Writing from Stanford University and studied American Literature at the University of Wisconsin, Madison. He edited a poetry magazine, the Chowder Review, for 15 years.

Taking a break from literature, Slate was for many years vice president of global communications for EMC Corp., then COO of a biotech / life sciences startup. He is currently a member of the board of directors of the Massachusetts Foundation for the Humanities and a member of the National Book Critics Circle. He was a judge for the 2019 PEN America Translation Prize. His debut collection of poems was nominated for the National Book Critics Circle Prize for Poetry and the Academy of American Poets Lenore Marshall Prize.

In 2016, Slate and his daughter Jenny co-authored and published a memoir, “About the House,” helping raise over $ 250,000 for nonprofits in the United States and abroad, including Planned Parenthood and the ACLU.

Slate moved to Vineyard, with his wife, artist and former genetic counselor Nancy Gilson, in 2017. Since then he has returned to writing regularly and often reads his own work at Pathways, with a variety of poets and writers in local prose.

â€œThe idea is that we’re all in the same business together,â€ he says. â€œWe’re all trying to show what’s real in the world. Some of the writers are ostensibly political, some personal, some more abstract, some focusing on nature. Despite our differences, as writers we are all in the same boat.

The ‘Writing and Poetry Tuesdays’ take place each week in person (for now) at the Chilmark Tavern and via Zoom. Doors open at 6.30 p.m., readings begin at 7 a.m. For more information or to get involved in upcoming events, contact trailsartsmv@gmail.com.