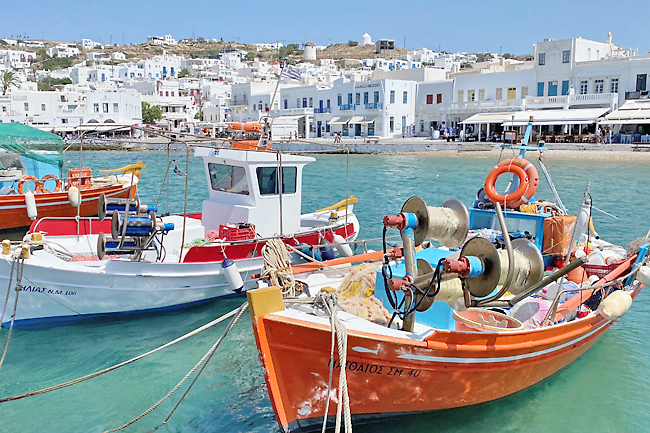 After an epic pandemic, an odyssey in the Aegean Sea

THE WASHINGTON POST – The heroes of Greek mythology, as we have learned from poets, scribes and elementary teachers, rarely had an easy journey.

A parade of indifferent and often ruthless deities often stood by with cruel complication: Daedalus flew from a trap only to see his son Icarus perish when his wax wings melted. After the fall of Troy, Odysseus battled high winds and monsters for another 10 years to return home, where even more threats awaited.

As my wife, Mica, and I departed Piraeus on June 26th aboard the Wind Star for 148 Windstar Cruises passengers, I couldn’t help but wonder how reality would stand up to the mythical Greece of my childhood. We were navigating the grim uncertainties of the pandemic: Greece only reopened to many foreign visitors in mid-May, and after a global moratorium on cruises, the Wind Star was one of the first passenger ships to resume sea.

Some things we knew, and others quickly became apparent. We had to provide proof of vaccination, as did other passengers and crew. We would sometimes be asked to wear masks on board ships and on land. We had to fill out many forms and pass several coronavirus tests to fly, navigate and get home without delay.

The Fates mingled a bit and concocted a late reminder on our weeklong cruise (take note, Achilles) that no protection is foolproof. More on that later. In the meantime, think of the wind and the waves, the scorching sun and the cool, salty and brilliant blue-green water of the Aegean Sea.

Evoke the scent of basil leaves, baked bread and jasmine flowers. The sight of ancient fortresses, kings’ tombs and purple bougainvillea leaning against whitewashed walls. Think 2,000-year-old shards of pottery creaking underfoot – the never-ending sound of history on the move.

Remember, as I did, the forced separations and the varying degrees of isolation that we have experienced over the past 18 months. For all its splendid achievements, Greece found itself with an economy as in ruins as its ruins. Tourism, along with maritime transport, is an economic mainstay, and locals are eager to welcome visitors again.

“A year ago in May I crossed (Mykonos) and it was so empty I could hear the sea,” tour guide Amaryllis Grypari told me. “It never happens. Now we hope.

Delos, the small island near Mykonos where Grypari guided us, was a renowned tourist destination in its heyday – around 2,500 years ago. The mythological birthplace of Apollo and Artemis was teeming with commerce and attracted visitors to worship in its temples.

It is now a jumble of stones, scattered marble and shards of pottery. But fascinating, nonetheless, to connect the points of abandoned beliefs and civilizations with surviving evidence of beauty and sophistication: graceful mosaic floors, marble columns, statues and efficient systems for trapping rain and transporting water.

After booking this cruise in May, we also arranged daily Windstar shore excursions which come at an additional cost (usually around $ 100 to $ 150 per person). We had two reasons. The first was that the coronavirus rules in place at the time (since abandoned) specified that to keep passengers in a bubble, only those on organized shore excursions would be allowed to disembark at ports.

Even with this requirement removed, we had a second reason. As this was our first trip to Greece, we sought the help of guides to help us separate myths from reality, or perhaps reconcile them.

Others who had visited these islands before sought the freedom to move around on their own. Melanie McTiernan Norbut and her husband Michael Norbut, from Linden, New Jersey, told me they had crossed Greece with Windstar about 20 years ago.

“We wanted to be able to walk around town, not blow bubbles,” she said.

“After a year and a half, the six-foot distancing is second nature. We just wanted to go somewhere. We are 67 years old and we have our vaccines, what are we waiting for?

“For us, it wasn’t that important that we do, do, do. Greece is so beautiful, and for us it was a chance to enjoy the familiar, ”she said.

However, everything was new and glorious for both of us: the Acropolis lit up at night, or the ruins and nearby red beach of Akrotiri in Santorini. .

And simple things, like a grandmother inviting inside to see her house in Syros, or sifting through the magical creations of Kostas Boukouras in Patmos. He transforms discarded textile machines like spools into sailboats and bottle openers in his shop, Talanto.

Everywhere we were greeted in English, almost always by conscientiously masked traders (Greece lifted its outdoor mask mandate on June 24 but kept it in place for crowded spaces, including indoors) .

In Monemvasia, the medieval fortress was built to repel invaders. Today it welcomes tourists to quaint shops, as does the nearby Liotrivi organic farm.

There Konstantina-Helen Natioti explained to us how olives are still harvested by hand and how, until recent years, they were processed by machines pulled by horses and turned by hand. She then guided us through a detailed exhibition of baking bread in a wood-fired oven.

After noting that the average Greek consumes over six gallons of olive oil per year, she demonstrated that the not-too-secret ingredient in their amazing bread is olive oil, in large quantities.

“It’s in our culture,” Natioti explained.

Before we left, we arranged to ship several liters of olive oil and various other items home. For good measure, we’ve made a commitment to ‘adopt’ an olive tree for a year, which involves naming a tree and ultimately receiving its production: around five liters of extra virgin olive oil after harvest.

“Ladies and gentlemen, the wind is against us,” Captain Belinda Bennett’s voice echoed through the ship’s sound system as we left our final port of call, Nafplion. “We cannot set sail.”

Wind Star is a charming four-masted sailboat built in 1986 in Le Havre, France, and renovated in 2018. If the conditions are right, she can sail entirely on wind power, but the ship relies mainly on her engines.

The ship’s common areas, such as the living room and the main dining room, are timelessly elegant. We often sat outside on the teak decks in the shade; that day, as the breeze brushed the surface of the sea, we watched in the distance the imposing Venetian fortresses that guarded the port of Nafplio.

An hour later, the wind hit from an unexpected direction. After a festive start to the evening around the pool, Bennett took the microphone in hand for an announcement.

“We had a positive coronavirus test on board,” she said.

Bennett went on to explain that the individual and a companion (who tested negative) had been quarantined in their cabin and would continue to be isolated in an Athens hotel in the following days.

I spoke with the captain afterwards, and she told me that the positive test had presented that day as part of the test, the guests could make arrangements on board to return home ( air passengers to the United States, even if vaccinated, must currently demonstrate a negative coronavirus test within three days of travel, or proof of recovery from COVID-19 within the previous three months).

A Windstar spokeswoman later confirmed that the individual in question had not shown any symptoms and that further tests of the passengers and all of the crew came back negative.

“We are delighted that our Beyond Ordinary Care policies worked together to contain the case without any transmission to other guests or the crew,” Windstar Public Relations Director Sarah Scoltock said via email. “We believe this combination of practices creates layers of safety on board: testing, vaccination, improved cleaning practices, updated HVAC system with HEPA filters and UV-C lamps, social distancing and masks.”

Unlike Ulysses, whose ship was blown away by headwinds unleashed by the curiosity of his crew, we experienced no lasting repercussions on our journey from testing positive for coronavirus. Neither our disembarkation nor the next cruise was delayed.

Earlier on that last day in port, we had seen everything from the picturesque charm of present-day Nafplion to the nearby ancient ruins of Mycenae. Our guide, Eva Andrikou, concocted for us an abridged version of the bloody story of King Agamemnon, his family and his comrades, as described by Homer in the Iliad.

Andrikou said, however, that the boundaries between myth and history remain blurred at best. Was Homer telling real events? Was he blind? Did he even exist? No one can be sure.

“What we do know,” she said, pointing to the ruins around us, “if this acropolis didn’t exist, neither of these stories would exist.

There are two sides to Glasgow. Cop26 will only show one | Ian jack