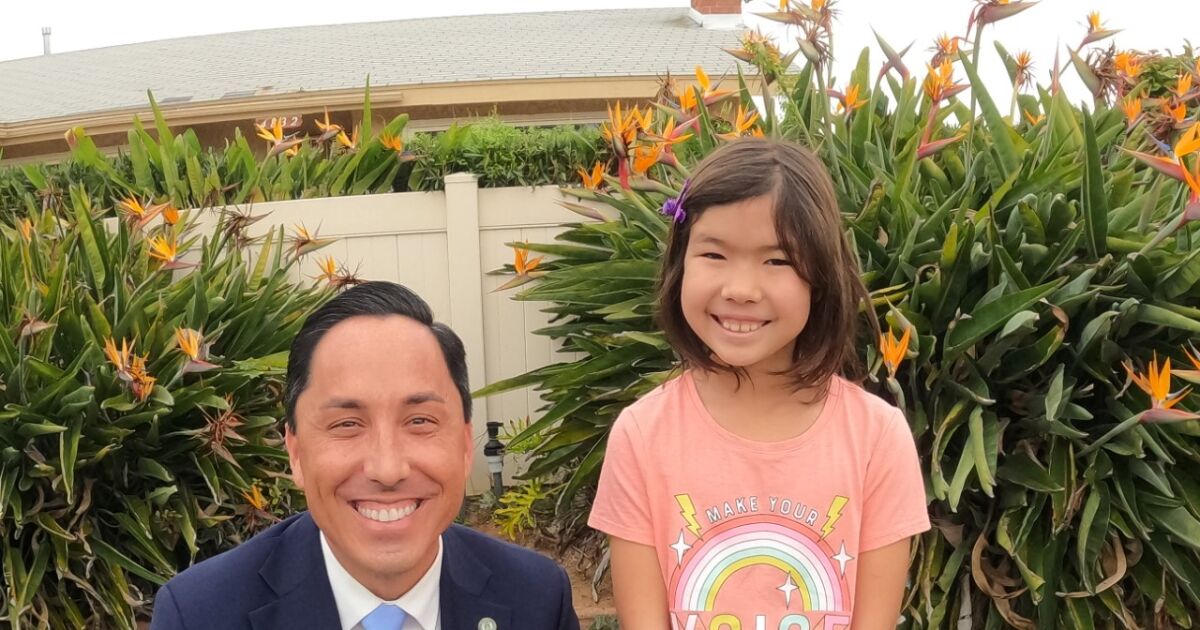 Sky Ewing was just 7 years old when the pandemic hit. Nonetheless, the 4-foot-6, 64-pound Dynamo has racked up plenty of activity over the past 2.5 years.

She and her father, Edward Ewing, participated in several rallies against the closure of public schools after the shift to online learning. In 2020, their photo made the front page of the San Diego Union-Tribune during a protest.

At the age of 8, she was interviewed on local news channels including KUSI, ABC, NBC, CBS and Fox about her dissatisfaction with school closures. After interacting with journalists, she decided to become one herself.

Sky has channeled its pent-up pandemic energy into creation his own YouTube channel with the help of his father. He oversees programming, video recording, editing and production.

“I’m just facilitating his dream,” Ewing says. “She’s the one running it all. I’m just trying to keep up.

She interviewed an FBI agent; a dentist; a construction manager for the Hotel del Coronado; a staff member of the Humane Society; a man who maintains a rock farm; Teddy Droseros, who started the Grateful Peoples project; and others that piqued his interest. She has recorded 27 interviews so far and continues to be strong.

Sky appeared with reporter Jeff Zevely on CBS News 8’s “In the Zevely Zone.” Not only did he interview her, but she also interviewed him. “Meet the next Barbara Walters,” Zevely announced.

One of his favorite chats was with maritime historian Peter Knego, whose Oceanside home is filled with artifacts and furniture he salvaged from luxury mid-century ocean liners.

“The coolest thing is that her stairs are from a cruise ship,” Sky says. “And he has a couch from ‘The Love Boat’.”

When she interviewed the FBI agent, she asked, “Do you have a file on me?” To which he cryptically replied that he could neither confirm nor deny this.

On September 10, Sky co-hosted the Boys and Girls Clubs Gala fundraiser, ‘An Evening to Change Lives’. She was the “junior emcee” teaming up with CBS News 8’s Carlo Cecchetto (who, of course, will be the subject of one of her upcoming YouTube interviews).

To avoid social isolation from her peers, Sky’s father had her enrolled in the daily summer program at the Boys & Girls Club, which has remained open during the pandemic. This meant round trips to the nearest branch with an opening at Forest Ranch nearly 40 minutes away.

“She’s not shy,” her father said. Sky had a knack for chatting from the start. At age 3, she was put on a waiting list for the preschool program because there were no more places. So Sky visited the school with her dad and asked them directly, “How long do I have to wait to get into your kindergarten?”

Sure enough, a place was immediately found for another very determined girl.

Sky’s dream is to become the youngest person to interview the US President. But she also wants some mic time with CBS Mornings co-host Gayle King and King’s longtime friend Oprah Winfrey. When interviewing someone, she wisely asks for an introduction to high profile people she knows.

What would she ask of King, I asked.

“What is your story about being a journalist before becoming a presenter?” Sky replied. She also wonders what kind of stories King likes and the most exciting ones she has covered.

To prepare for their interviews, Sky checks the interviewee’s website and biography. “I do my homework. I write down my questions ahead of time,” she says. She also wears her lucky socks.

The self-taught journalist says an unexpected perk has been some “cool swag” – brand name stickers, t-shirts and water bottles.

When she’s not reporting, she has the usual interests of a nearly 10-year-old girl – following the exploits of Batman characters Wonder Woman and Hanna-Barbera. She enjoys rock climbing, bowling, bodyboarding and learning to play the recorder.

His father says talks will continue. “I want to see where it goes. I have all the confidence in the world in her.

Her most exciting interview to date, she says, was with Mayor Todd Gloria, who stopped by her house.

Meanwhile, she is delighted that distance learning has been put to rest and she is back with her friends at nearby Holmes Primary School.